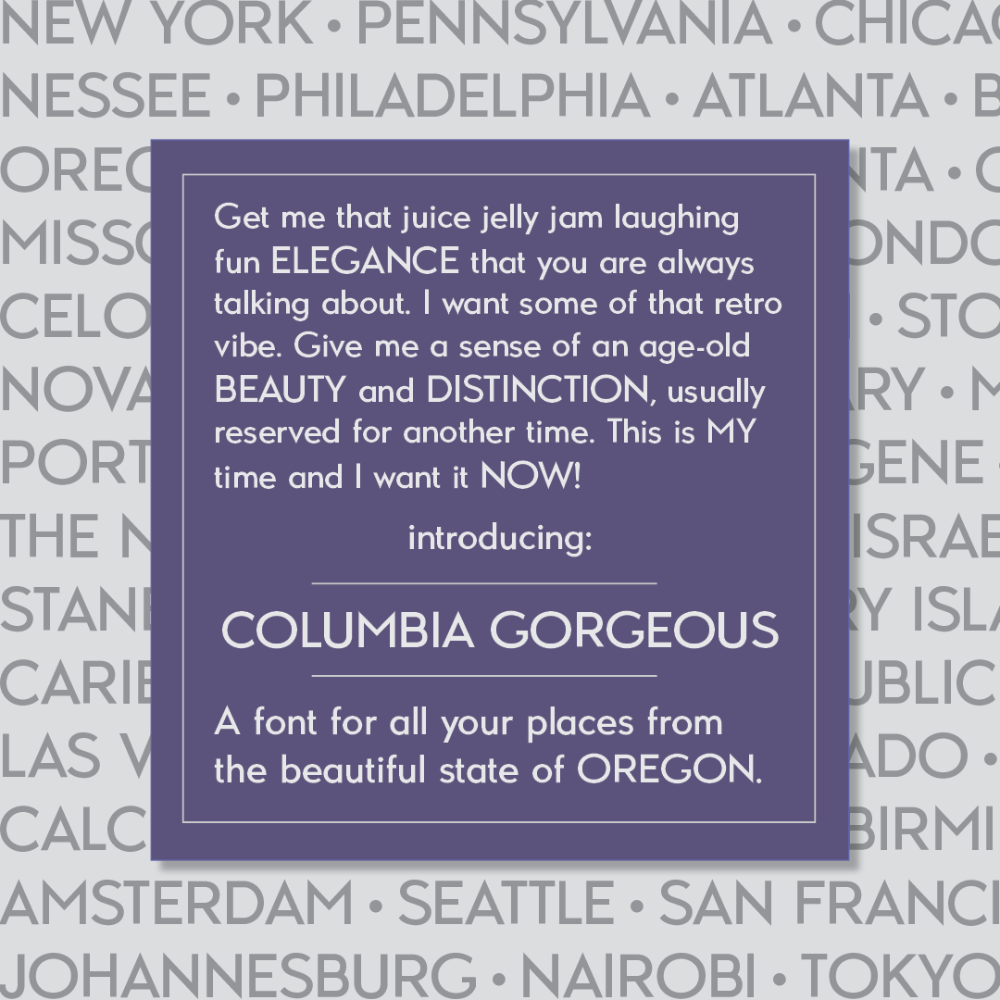 The Columbia Gorgeous typeface and font emerged from the re-branding of our company, Madison Design to Madison Design Company (for web domain reasons). We thought that with the added word, “Company,” it seemed to call for a slightly retro vibe, maybe with the abbreviation, “Co.,” in place of the full word. For my muse, I looked at the modern, crispness of Gotham and mashed it up with the geometric typefaces, Futura and Century Gothic— in the latter case it mostly informed the lighter weight. I wanted something that looked like it might be on the glass at the street level of a downtown office building in Manhattan in the 1930s while at the same time look at home in a high quality brand today.

I gave the capital C, O and G, big, round bowls to open up the space and kept some other characters relatively narrow, to mimic some of the qualities of Futura. I maintained fairly healthy-sized bowls on the R, B and D that are more to the proportion of Gotham.

Start with a skeleton

I start out, whenever possible (depends upon the design of the typeface), by creating the basic proportion with a monoline vector in Illustrator and control the thickness with stroke weight. Once happy with the basic proportion, I can expand the file (write the stroke to outlines) and edit for contrast (thick to thin ratio of strokes).

After expanding the file, I spent a lot of time on the lower case letters trying to keep the type design fairly geometric, but opening up spaces at the intersections to a contrast level that was more reminiscent of a Realist Sans Serif (sometimes referred to as Transitional Sans Serif), like Helvetica and company. This kept one foot in a very geometric world and one in the familiar, more roman–based proportion world.

After creating a master for both a light version and a bold version (though Columbia Gorgeous Bold is more of a medium or semi-bold) for later interpolation, I plot the characters to fit within an overall font height (from ascender to descender) of 1000 units for interfacing with Glyphs. I establish a baseline guide and zero out my ruler at that baseline to identify zero. This helps when importing into Glyphs (or any other type-creation program that I am aware of).

I imported my characters into Glyphs and made basic side-bearing adjustments with lots of help from Type Club aficionado, Andre Casey. After getting some routine proportions worked out, it was on to kerning pairs and establishing groupings that would expedite the process of overhanging letters like T, F, V, W and Y with their common neighbors as well as combining round characters with straight sided and angled characters and any other odd combinations— there are helpful paragraphs available online that show combinations of capitals with lowercase letters, all caps in combinations and all lowercase combos that you can use to look for problems. One of these can be found here. Perhaps some of you have others that you like and would be willing to share those resources in the comments below.

After going through these drills, more design issues are inevitably found. For example, the arm of my lowercase r was too long and kept pushing letters away, creating odd negative space. Many things revealed themselves when pairing them constantly with other letters.

Once I got past that stage, I exported the file as an OTF font file and loaded it on my computer. I found a long body of sentence case copy to use as a muse and converted it to Columbia Gorgeous. I went a little bigger than I might otherwise do (12 point) because Columbia Gorgeous Bold is not really a font that you would ever use as body type. I printed this out and with pen in hand, I circled the many oddities that I found and went after them one by one in Glyphs. I printed a full page or two of place names in all caps and did this again to look for spacing issues. This continued for two or three more rounds with different copy until I felt like things were getting to point where I could crowd source for feedback by releasing a 1.0.

In the end, I was really satisfied with the level of both downtown elegance and a kind of roaring twenties, pre-depression era gaiety that I found in the lowercase letters (juice jelly jam laughing fun). I felt that it could have its place in most designer’s quiver for just that right retro flavor when needed.

The name for the font came around because when I typed out the words, COLUMBIA GORGE, OREGON, in all caps, I loved how the big round bowls opened up those words. Thus, I began referring to it as “Columbia Gorgeous.” I am very excited to offer this new typeface to the design community as a first version. Should there be any issues that you uncover in using it, please let me know. Remember that any funds received from the release of this first version will go to providing free seminars on typography education. Type Club teaches anyone who wants to attend these seminars such things as letterpress, calligraphy, bookmaking, digital font creation and many other things, as well as provide online educational resources on typography via our website, TypeClub.org.

Thanks for letting me share this font with you.

Donate to Type Club
Your donations allow Type Club to host events and provide resources for typophiles free of charge. We greatly appreciate your support.
Get Social